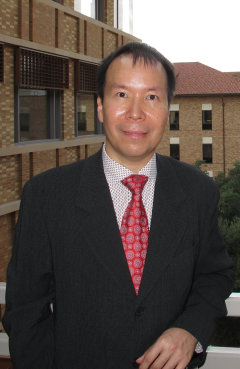 Bio: Albert M. K. Cheng is a Full Professor and former interim Associate Chair of the Computer Science Department at the University of Houston (UH). He has pioneered the response time analysis of real-time Rule-Based Systems (RBS) in 1988, and is now doing the same for Functional Reactive Programming (FRP), which can potentially transform the way we implement next-generation embedded systems. His research interests center on the design, specification, modeling, scheduling, and formal verification of real-time, embedded, and cyber-physical systems, green/power/thermal-aware computing, software engineering, knowledge-based systems, and networking. He is the founding Director of the UH Real-Time Systems Laboratory. Prof. Cheng received the B.A. with Highest Honors (summa cum laude) in Computer Science, graduating Phi Beta Kappa at age 19, the M.S. in Computer Science with a minor in Electrical Engineering at age 21, and the Ph.D. in Computer Science at age 25, all from The University of Texas at Austin, where he held a GTE Foundation Doctoral Fellowship. He has served as a technical consultant for a number of organizations, including IBM and Shell, and was also a Visiting Professor in the Departments of Computer Science at Rice University and at the City University of Hong Kong. He is a co-founder of ZapThru.com, where he is currently the Chief Strategy and Technology Director.

Dr. Cheng is the author of the popular senior/graduate-level textbook entitled Real-Time Systems: Scheduling, Analysis, and Verification (John Wiley & Sons), 2nd printing with updates, 2005. He is a Senior Member of the IEEE, an Honorary Member of the Institute for Systems and Technologies of Information, Control and Communication (INSTICC), and a Fellow of the Institute of Physics (IOP). His recent awards include the Outstanding Leadership Award as Track Chair and the Outstanding Leadership Award as Keynote Speaker at IEEE ICESS 2014, and the 2015 University of Houston’s Lifetime Faculty Award for Mentoring Undergraduate Research for his “Exceptional efforts in demonstrating a lasting commitment to undergraduate research.”