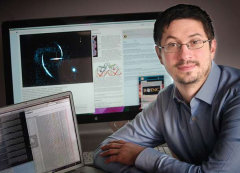 I am an assistant professor at University of North Dakota, and was previously a post-doctoral researcher and adjunct professor at Rensselaer Polytechnic Institute. I am currently the information director of the ACM Computing Surveys Journal. My main research interest is collaborative computational science using large scale distributed and high performance computing environments, with particular focus on evolutionary algorithms, neural networks, computer vision and simulation.

I have been the main developer and community liaison of the MilkyWay@Home volunteer computing project from the time of its creation in 2007. MilkyWay@Home uses volunteered computers to determine the origin and structure of the Milky Way Galaxy with the help of different evolutionary algorithms, maximum likelihood evaluation and n-body simulation. MilkyWay@Home has grown to over 25,000 volunteers from over 150 countries, who are contributing around 400 teraflops of computing power [boincstats.com], faster than many supercomputers. I have also implemented versions of this software which are also currently being used by astrophysicists on RPI's BlueGene/L supercomputer and various cluster computing environments.

In a continuation of my work interacting with the public and developing open source volunteer computing systems, I have also been working on other volunteer computing and crowd sourcing projects, such as Wildlife@Home, which combines crowd sourcing with volunteer computing to analyze avian nesting video to gain a better understanding of the behavior of different federally protected species, SubsetSum@Home which is studying a problem in theoretical computer science, and DNA@Home which is currently under development for finding protein binding sites in DNA and other bioinformatics purposes. These projects are all part of the Citizen Science Grid hosted here at the University of North Dakota.

I collaborate with professors Jim Higgins and Brandon Wild on the National General Aviation Database (NGAFID), a project for data mining aviation data to help improve safety in general aviation.

I have also been a main contributor in the development of both the compiler and runtime of SALSA, a programming language based on the actor model of computation. SALSA enables easy development of concurrent and transparently distributed applications by following actor semantics.